I just watched the funeral mass for Father David Ayotte, a parish priest we recently lost to pancreatic cancer. It was very moving, especially the remarks made by his sister, Maureen.

Part of the mass included a quote by Pierre Teilhard de Chardin that strongly resonated with me:

“Someday, after mastering the winds, the waves, the tides and gravity, we shall harness for God the energies of love, and then, for a second time in the history of the world, man will have discovered fire.”

I thought, also, of the Albert Einstein quote:

“Concerning matter, we have been all wrong. What we have called matter is energy, whose vibration has been so lowered as to be perceptible to the senses. There is no matter.”

In these pages, I am looking at models in which the material world is emergent, and it is light from which it emerges. We have been taught that nothing may achieve the speed of light; these models upend that assumption. Our light dips below its own speed (incarnates), eclipses its own speed (ascending), and returns to its own speed (descending). Achieving the speed of light is not only not verboten, it is inevitable.

As I age, I can feel my light becoming deranged from itself in two directions at once. To the left of time, like the rocky planets, it is precipitating out of solution. To the right of time, like the gas giants, it is burning up. I am becoming both too dense and too fast, simultaneously. With time, I am no longer light. I am matter + energy, superimposed.

I do not know how to remedy this. I am hoping other minds will come aboard, and help.

What is the difference between me and the 20-year-old in the pew beside me? I believe the chief difference lies not in the body, but the brain. My brain interprets time’s axis as longer than hers does. To achieve the speed of light, I am dipping too far to the left, then rising too far to the right, while she is (comparatively speaking) standing still.

I believe the structures in my brain responsible for circadian rhythm (eye, pineal gland, SCN, HPA axis) are reading the speed of light via my environment and setting my metabolic rate accordingly. But the instruments that are doing the reading (eye, pineal gland) are not able to read light’s speed in a “pure” or objective sense; they are reading it vis-à-vis their own speed.

For instance, last night I ate a high-oxalate meal containing a lot of kale. Oxalate is a crystal found in plants capable of photosynthesis. Since getting sick, I typically eat a low-oxalate diet, but last night I was craving greens, perhaps because I ate a healthy dose of red meat for lunch. It could be that, with fresh iron on board, my body was ramping up heme synthesis and craving vitamin K1.

But this morning, after the high-oxalate greens, I woke up with stiffness everywhere and an acute loss of gut motility. I believe my brain was reading the light in the oxalate crystal as slower than itself, and was, in turn, slowing my body’s core rate of metabolism. But to slow the core rate of metabolism—unless we have first eclipsed the speed of light—is to die. In this paradigm, reality as we perceive it—time—is taking place at the speed of light.

To reverse this problem, this morning I drank a big mug of coffee (copper, electricity) with grass-fed milk (high in vitamin K2). This eliminated the pain in my joints and got my gut moving again. But to my brain, which had perhaps internalized or mimicked the spin-rate of oxalate, it is creating a subtle, sub-perceptual impression of spin. I can feel the structures in my brain suppressing or correcting an impression that my visual field is spinning.

According to this paradigm, every observer is a miniature event horizon, a time horizon, an equator. To dip below the equator is to spin in one direction; to rise above it is to spin in reverse (viz. the Coriolis effect). When my understanding of time’s axis is too long, time is no longer “flat” for me as it is for someone at the equator. It is spinning both forward and backward, like a pair of vortexes, superimposed. This is highly inefficient, energetically. Although I have successfully brought myself back up to speed, I now have feelings of nausea and mild vertigo, as my brain adjusts.

My cells, too, are conscious. Every cell is an observer with its own understanding of where the equator lies. When I had basal cell carcinoma on my shoulder, I could practically visualize the lengthening of time’s axis, practically see time working in reverse. There was an actual indentation, like a small vortex, at the cancer site. I believe these cancerous cells were experiencing the same paradox as I am. Their light is deranged from itself in two directions at once—both too dense, and too fast. Oxalate (a crystal that is found in plants capable of photosynthesis) is known to induce breast cancer, and I believe this is the mechanism: In the presence of oxalate, the cell alters its pH and its core metabolic rate in tandem. In so doing, it enters a new time signature. 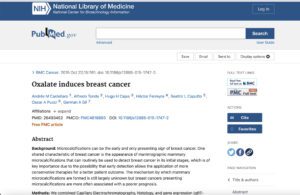 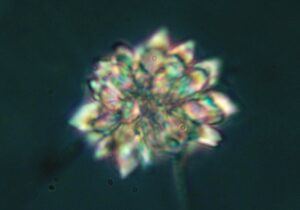 My favorite part of Father Dave’s funeral was a story comparing death to a ship as it sails away. As the sails fill with wind, we watch from the shore as it disappears at the horizon. “There she goes!” we say. But at the exact same moment, there is another shore, an opposite horizon, where the ship comes into view. “Here she comes!” they say.