Perception of Environment Is Subjective

One of the ways this model challenges our everyday lived experience is it does not treat time as linear. Rather, it views time as simultaneous—all days are happening every day.

So, too, I am arguing, with pH7. pH7 will read very differently to a brain that is too acidic or too alkaline.

What I am perceiving might be true (“flat”) pH7, akin to perceiving water as water. But might it also be vapor that is condensing to water? Or ice that is warming to water? All three are technically water, but in the latter two, there is a foreground and a background value.

We do not, at present, treat illness as having a foreground and background value. We focus—to far too great an extent, I believe—on the foreground image. And so the cancer returns. And the joint continues to degrade. Because we are not addressing the root of the problem.

Could this truly be a holographic universe, as Leonard Susskind, Stephen Hawking, Juan Maldacena, Gerard ‘t Hooft, and many others have predicted? If so, then perhaps light, like time, has three varieties of observer.

We can perceive light as itself—light qua light, the plain light of day (pH7 as pH7). Or we can perceive energy that is condensing (moon). Or matter that is heating up (sun).

“Sun” and “moon,” in this case, are composite images. There is a foreground and a background to what we are seeing. We see the distillate—not the energy that surrounds it. We see the fire—not that which is burning. 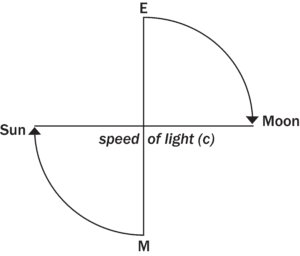