I have an essay under submission at the moment called “Seeing at the Speed of Light.” How does light see? I believe it sees as Wednesday sees—and that is what has been throwing us off. To see as Wednesday sees is a paradox.

From the present, as I OBSERVE the future, it appears to be exploding. (There are many possibilities for what tomorrow could be.) But as I ENTER the future, it is in fact collapsing.

From the present, as I OBSERVE the past, it appears to be condensing. (There is only one possibility for what yesterday was.) But as I MOVE AWAY from the past, it is in fact exploding.

From Monday’s perspective, I could have five hundred different things for lunch on Wednesday, including a sandwich at my favorite café in Santa Fe, New Mexico. But as I approach Wednesday, moving closer and closer to it through time, the list of possibilities dwindles. If it is 11 AM Wednesday, and I did not leave for Santa Fe three hours ago, I am not going to have that sandwich. 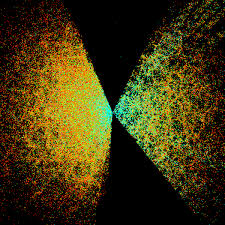 Observing from the center, as I look left, light explodes. But as I move left, light condenses.

Observing from the center, as I look right, time condenses. But as I move right, time explodes.