The Edge of Our Sight

Does the ocean end at the horizon? The horizon is just the edge of our sight. Let’s apply this same principle to the sky.

We are used to thinking of what we perceive as physical objects. I am interested in seeing them as limits.

But this cone just describes a relationship. More than a thing to see, it is a way of seeing.

In other words, what if the object we’re seeing is not so much a thing as a limit? A horizon.

My work is trying to find new ways to define these edges. 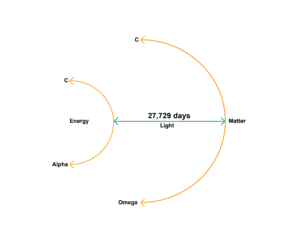 I was talking with my friend Martha Carlin, whose husband John has Parkinson’s, about my suspicion that his brain is misgauging light’s limits. He is using the moon value in place of the earth value.

If earth is a width of light, “moon” is too dense. It needs to expand, but it can’t; the sun is holding it in place. “Sun” and “moon,” here, are twin poles of the same light. If we squeeze light to the density of the moon (“the point” of time’s cone), it will expand to the width of sun (“the mouth” of time’s cone). The sun, in these models, is akin to the moon’s halo.

Meaning that when time is too magnetic, I have to be too electric. I need more magnetism (iron), but I’m trapped. There is too much magnetism on the inside, and not enough on the outside. (PD)

Meaning when time is too electric, I have to be too magnetic. I need less magnetism (iron), but I’m trapped. There is not enough magnetism on the inside, and too much on the outside. (ALS)

Iron, iron, iron. The more I look at human health, the more essential iron—especially natural, heme iron—seems. I suspect it will be crucial to our practice of medicine, in the future. Are we—our future selves—harvesting it along the 37th parallel?